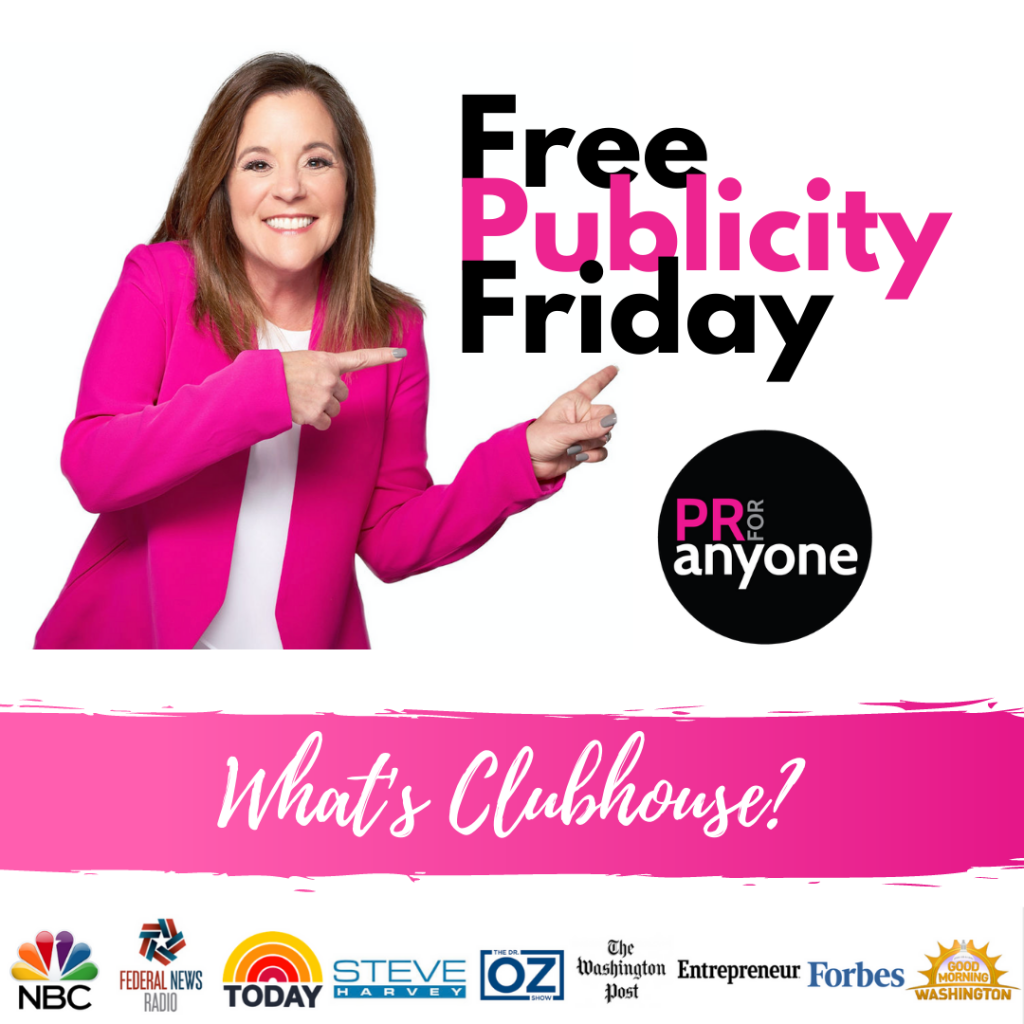 Are you on Clubhouse?

Clubhouse is the newest, hottest social media platform. Right now it’s only available for Apple users but at the rate of its growth, I’m sure Android is right around the corner. It’s an invitation only platform which helps with the allure of the platform. When I started, there were thousands on, now there are millions. We’ve spent the last year in lock down. People are desperate to connect. What’s great about Clubhouse is it’s only an audio platform. You can roll out of bed and hop on and join a conversation. There are rooms about anything you can imagine from business to social to networking to music to how-to’s, etc. Anything and everything is being covered on Clubhouse

What makes it different is that there are no pictures and no videos and no posts. It’s just rooms and conversation. Is it taking off? Well Facebook and Twitter are quickly creating their own audio platform and Clubhouse has gotten a bunch of VC money so it must be on to something. The current value is over $1 billion.

That being said, should you be on it? It remind me of the early days of Twitter. It was an important and impactful platform. Then, it got noisy. I spent a bit of time on Clubhouse early on and it can be like a rabbit hole. There is tons of conversation and you could be there all day. Some of my colleagues are landing business from it. But I’m not sure how much time they spent sitting in rooms to land one client. The other part of this is to get in front of the crowd, you need to be able to speak so it helps to know the people running big conversations. There is no messaging on Clubhouse so people have to go the extra step to reach out to you on another platform like Instagram.

If you have the opportunity, give it a whirl. You have exposure to some big people right now. It’s like the early days of Twitter when you could access anyone. Remember your ROI. Sitting all day engaging in conversation is ok, every once in awhile, but just like scrolling through Pinterest all day, it can be a time suck and we’re in business. (Don’t get me wrong, I LOVE Pinterest but I find myself going in for a quick recipe and 3 hours later, I’m still there – LOL) There are definitely things you can learn by being on Clubhouse and amazing industry experts there but I recommend being selective in your choices and planning it in your calendar.

My company is called PR for Anyone because anyone can land in the media. Anyone can get publicity! To learn how to do it using what’s trending in the world right now, watch this week’s video below or get more by reading transcript below. If you want to chat about your PR and visibility, click on the box below or use this link >> Let’s Chat NOW is your time to by seen as THE go-to expert, an A-Lister in your industry! It’s going to be someone so let’s have it be you and not your competitor. Let’s chat: And get your free Blueprint to learn how to do this >> HERE

Hey everybody. It’s Christina Daves with this week’s Free Publicity Friday PR Tip. You guys on clubhouse yet? Fascinating new social media platform. I’ve been on for gosh probably three weeks now it is growing like crazy. I’ve heard there’s over six million users. Reminds me a lot of when Twitter first started. There’s a lot of celebrities on there, a lot of big influencers. You can get to, if you remember Ashton Kutcher was one of the first ones on Twitter, accessibility to these people. I’ve even heard Oprah’s on some hidden accounts checking it out. It’s all audio. You can go in and be part of a conversation really with anybody. You can host your own events there. You can talk about your expertise. It’s really a cool platform. It’s by invite only and it’s only for Apple users right now. I do have some invites if you’re interested. I do maybe I’ll run a contest and give a couple of those away.

But if you’re on there, it’s really interesting and I’d love to hear what you think about it and if It’s growing your business. So that is this week’s tip. Check out Clubhouse if you’re on Apple, get in part of the conversation. Again, it’s new. It’s exciting. Everybody’s there right now. So that is this week’s tip. I also have for you our free blueprint which will help you with things like social media messaging PR, so go to CaptivateandCashin.com/blueprint and you can download that. It’s got some amazing tips in there. To really help you stand out and get visible. So check that out start pitching the media and share your successes with me.

Watch and Learn about Clubhouse